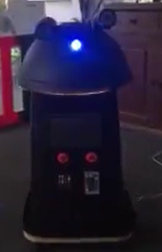 My 2 1/2 year old is robot mad.  I played him an old youtube clip of Metal Micky from the early 1980’s that was on TV when I was a kid and he has been an addict ever since.  There’s some more youtube vids of a guy in the USA retrofitting OnmniBot (again from the 80’s) with modern tech as well and he watches it over and over..

So I thought, why not build him his own one.  He’s fully into the parts and ‘how does it work’ buzz and fizzes when the AliExpress parcels turn up from China with servo’s and bits and pieces.

I wanted the thing to be a similar size to him, be able to move around, wave its arms, move its head left and right and control various LED lights and strips.  A project we can build up to do different things and tinker around with on Sunday afternoons.

So this post is going to be the process of building it up, physically, sourcing all the bits and the electronics (as simply and cheaply as possible) to bring Micky to life..

I aim to build up the electronics using simple cheap readily available parts.. and maybe when the design is ‘stable’ – make in to a single PCB – maybe others can contribute to the design?? I’m going ‘open source’ on the electronics design and C++ code.

Here’s a link to GitHub project for the source code.. https://github.com/paulobriennz/plasticmicky

I’m just a beginner really with C++ and micro controllers, but I’ll have a crack.. if any one wants to make the code better – please feel free 🙂  I was even thinking, this could be a project to build in school’s for kids to learn electronics.. there’s ton’s of ‘instructable’ type articles around on the net about how to use an Arduino to make some wheels move, or lights flash, or a servo do things but not really any one stop guide that combines all the components to build a walking talking robot with mobile control and a bit of intelligence to combine movement with ‘personality’.

Also going to build an Alexa skill.. so Micky can do things by voice command as well as mobile phone control.. I’ll post the code to this as well.

High level, I’ve come up with an electronics design based trying a few different bits and pieces – :

Plan is to be able to control via Blynk (or some IoT control app) to move about and make head move, control lights etc. and have an autonomous mode (like a Roomba) that can move around and use its ultrasonic sensor (radar) to avoid objects and change course.  Also expose a ‘web service’ so we can create an Alexa skill to get it to do things.  Simple Wi-Fi Setup so you don’t have to mess round with C++ code to get it to connect – plug and play!

First mission – what is the body and head going to be… after watching Metal Micky on YouTube for the 407th time with toddler, I thought – rubbish bins like you see in cafeteria’s.

I went to the Warehouse (general everything store we have in NZ – like Home Depot) and got 2 rubbish bins. This base can have the tracks screwed to it so its relatively ‘stable’.

I found this picture on the internet, and it’s gold.. thank you to whoever made it – I always struggle with which pins you can actually use for stuff, and which pins will stop the thing from booting or flashing if you try and use or do weird stuff (like SD2)

For translation – Pins D10 and D9 are RX/TX for the onboard USB Serial port – so if you are using the USB Serial, you can’t use these pins

D10 and D9 are RX/TX on the USB Serial – so if you want to debug in console, you can’t really use these easily

SD2 is evidently no go – I did an I2c test on GPIO 9 (SD2) and 10 (SD3) and the I2c Scan found the device connected, but trying to use just made the NodeMCU freak and reboot

D5,D6,D7,D8 are all fully usable read and write

D0 – messes with booting up/flashing so I generally stay clear of it.

A0 is Analog Pin MFA is becoming a common thing, as joyous as it is to use 🙂

I have a C# app that connects to Dynamics CRM/365 and I had to update it to support Microsoft Azure MFA.

I couldn’t really find any definitive guide out there, i had to cobble all different things together to get a working solution.

I hope this guide helps out some other poor sucker like me.

1. I had to update my application to use the modern CRM Tooling method of connection.

I added the following in Nuget to my solution – the key being the CrmTooling which supports the new connection string method of connecting.

In my code, i changed the way i obtained an IOrganizationService to the below (simplified):

This gets me a connection using the new Tooling DLL and a CRM Connection string.

Next step, you need to create an application in Azure AD.  I followed this guide.

The trick is the Redirect URI – i wasn’t working with a web app – I ended up using http://localhost

Finally, constructing a connection string that would work with the new registered Azure App.

Now when you go to connect, the Microsoft Sign In assistant pops up and handles the authentication to the CRM Instance.

And, if you have MFA turned on, you are also prompted with MFA.

The Tracing directory should be:

But some update somewhere changes it to:

I initially tried to change the trace directory back to the right place using CRM PowerShell, but that failed with authentication errors (that i have also posted on here – http://paulobrien.co.nz/2018/03/07/get-crmsetting-powershell-the-caller-was-not-authenticated-by-the-service-the-request-for-security-token-could-not-be-satisfied-because-authentication-failed/).

This is the guide i tried using the powershell method – makes sense, if powershell crm wasn’t broken as well.

So ended up changing in the CRM Database and registry:

And in the MSCRM_CONFIG database:

Had a need to run CRM powershell on an On-premise CRM Server.

I’ve had this same issue before where any powershell command you run against the Microsoft.Crm.PowerShell provider fails with authentication errors.

In this example, i was trying to run this and it barfed on Get-CrmSetting ….

Turned out to fix it, i needed to add a registry key.  After i did this it worked straight away (no need to reboot or reopen the PS window).

Method 2 in this article: